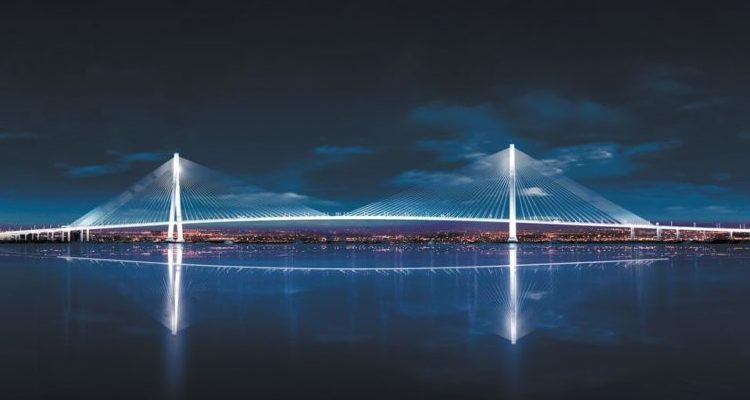 A once in a generation infrastructure project is now underway along the U.S. and Canadian border. A monumental bridge will span the Detroit River and unite Michigan with Windsor, Ontario. The Gordie Howe International Bridge is an ambitious vision that creates a crossing that will serve the two countries for the next century.

The massive 4.4 billion dollar project is more than just a bridge. It is a regional development project that will improve the international port of entries, surrounding road infrastructures, and surrounding neighborhoods. Along with construction components, the project includes initiatives for job training and hiring. It mandates the use of minority, indigenous people, and local firms as contractors, along with greening and streetscape updates in both communities.

The project’s funding comes from a public and private partnership. The Canadian government will cover construction and operating costs of the project in exchange for toll revenues. Experts predict the crossing to bring in $70 million per year for the government and will pay the tab over time.

The preliminary construction of the bridge’s foundation has already begun, and the overall project completion date is expected to be mid-2024.

It all started back in 2001 with a traffic study from the Ontario Ministry of Transportation, Transport Canada, the Michigan Department of Transportation, and the U.S. Federal Highway Administration. The study concluded that a long term solution was needed that would serve both Michigan and Ontario.

Due to increases in travel between the U.S. and Canada, the Gordie Howe Bridge will help alleviate some congestion from the existing Ambassador Bridge crossing. According to Transport Canada, the vehicle traffic in 2016 exceeded 18,500 a day, and in 2025, experts predict that the volume will increase to over 26,500 a day. The bridge will provide the two nations a streamlined process of moving people and consumer goods more effectively across an international border.

The massive length of the bridge will span 1.5 miles and include six lanes for traffic. In addition to car lanes, the crossing will provide bicycle and pedestrian lanes. Once completed, the crossing will become one of the top five longest bridge spans in North America and expected to last up to 125 years.

The new bridge will be two miles upstream from the Ambassador Bridge, which is only a four-lane road. A direct connection between Interstate 75 and Interstate 96 on the Michigan side will lead to the Howe. On the Windsor side, the bridge will connect with a new extension of Highway 401 in Ontario.

The Gordie Howe International Bridge design will feature two towers on each side of the river. The towers are said to match the height of the tallest building on the Detroit skyline. The bridge implements a cable-stayed design, which is unique from a traditional suspension bridge. To support the road deck, the cables on this bridge will fan out from the two main towers and provide more stability than a cable suspension design. This innovation negates the need for piers in the water.

The design shows “contemporary minimalism, evoking a sense of openness, lightness, clean lines and good proportions.” But, it is not only about looks. This style also helps to reduce costs and increase stability.

Even the bike racks will be unique. Contests in both Windsor and Detroit were held for local artists to submit creative rack designs. The cities will also build observation decks so visitors can watch construction progress and snap selfies.

The ambitious project is to be divided into four unique components. These sections include the bridge itself, the Candian Port of Entry in Ontario, the U.S. Port of Entry in Detroit, and lastly, the Michigan freeway exchange.

In Windsor, the Port of Entry will be on a 53-hectare site and consist of inbound border inspection facilities for both passenger and commercial vehicles. The Canadians will be responsible for toll collection for both the U.S.-bound and Canada-bound traffic. Once completed, the entry will become one of the largest anywhere in North America.

On the other side of the river, the U.S. Port of Entry will be just as spectacular. On 167 acres, the Michigan port will also become one of the largest entries in North America. The facility will also accommodate inbound border inspection for both passenger and commercial vehicles. The design will allow for the installation of further technology and the addition of expanded border processing facilities.

The last component involves road and freeway improvements on the American side that lead up to the bridge. This stretch of road is called the Michigan Exchange; this includes a direct connection from nearby interstates, four new road bridges, and the expansion of key intersections to allow transport trucks to make full, uninterrupted turns.

After years of environmental studies and obtaining permits, Canadian Prime Minister Justin Trudeau and then Michigan Governor Rick Snyder announced that an agreement had been reached to start the dual country Windsor-Detroit bridge crossing.

Official construction began on October 5, 2018, and consists of building the two main support towers. Each tower will rise to an astonishing height of 750 feet. In comparison, the GM Renaissance Center, the tallest building in Detroit, is 727 feet.

The first phase of tower construction is the foundation. The foundation consists of 12 deep, drilled shafts on both sides of the Detroit River. Once drilled, rebar cages must be installed and then filled with concrete. Each shaft will hold a solid 120-foot long pylon that weighs over 143,300 pounds and will become the main support structure for the Gordie Howe International Bridge.

Michigan equipment rental company, Alta Equipment Company, will be heavily involved. The Detroit based company was among those invited to the first groundbreaking ceremony. Alta Equipment sees the project as an “enormous opportunity for employers in the region and the overall Detroit economy.”

In addition to the big toys, construction will require bulldozers, loaders, excavators, aerial platforms, and more — a boon for local rental yards and equipment dealers.

Job opportunities and potential economic growth are exciting local officials and businesses. The project will require construction, maintenance, and operating jobs. The surrounding areas of the Port of Entries will lure new businesses to the upgraded neighborhoods

In 2012, the Candian Parliament created the Windsor-Detroit Bridge Authority (WDBA) to manage the project. The WDBA is a non-profit Canadian Crown corporation that operates under and reports to  Parliament. The WDBA does not only oversee the construction of the new crossing but is also to develop a plan to benefit the local communities.

Progress creates jobs, and the Gordie Howe International Bridge project is no different. Two thousand five hundred workers will be necessary for construction and operation over the next five years. Thousands of more jobs will come from the businesses that will supply goods and raw materials for the project. It’s never too late to look for work in the construction industry.

Gearflow put together a guide on how to find work as a contractor or heavy equipment operator.

Skilled jobs such as operating engineers, laborers, carpenters, electricians, landscapers, equipment operators, and truck drivers will all be in high demand on both sides of the border. These positions will help to boom the local and regional economies.

In addition to future skilled jobs, the ball is already rolling for some. Hundreds of designers, architects, contractors, and other personnel have already begun the development of this enormous project.

It is not just construction workers that will benefit. According to Workforce WindsorEssex, the project should create an additional 1100 spin-off jobs. These jobs will come from new businesses in the surrounding neighborhoods offering retail, food services, health care, and child care positions.

From the onset, one factor was agreed upon by all parties. The local communities must benefit. The WDBA developed a participation strategy aptly named the Community Benefits Plan. The plan not only involves local businesses and the existing labor force but also will support new job training and apprenticeships.

On the Candian side, at least $250 million of the work must employ workers and contractors within a 100-kilometer radius of the City of Windsor and Essex County. This agreement provides opportunities for Canadian Indigenous Peoples. While adhering to the First Nations policy, the project will provide jobs, increase awareness of skilled trades careers, and support apprenticeship programs.

The same applies to the Michigan side. A portion of the labor will be Detroit residents and Detroit-based businesses. As for minority businesses, the U.S government’s Disadvantaged Business Enterprise program will also see a 2.15% portion of the cost for construction and engineering work needed to complete the Michigan Interchange segment.

As for project oversight, the WDBA awarded the project to a seasoned veteran of bridge construction. Bridging North America is a company comprised of ACS Infrastructure, Fluor, and Aecon. All established leaders in the infrastructure industry. The consortium has built some of the most notable bridges in North America. Bridges such as the New Champlain Bridge Corridor in Montreal, the Harbor Bridge in Corpus Christi, Texas, the Tappan Zee Bridge in New York, and the San Francisco/Oakland Bay Bridge in California.

For design, Bridging North America went with Moriyama & Teshima Architects of Toronto. According to the Toronto based firm, “Aesthetics have been considered for all aspects of the project. It is a modern expression of the bridge form, derived from modern design and construction techniques, clearly of its time.”

Bridging North America has given a 74-month timeline. This includes the four components of the project and predicts completion in 2024.

The Gordie Howe International Bridge project is not just about a road and a hockey player. It is about two neighbors coming together and creating a monument that will last for generations. This ambitious undertaking will benefit communities and improve economies on each side of the Detroit River. The legendary Red Wing Howe, and his namesake bridge, are a testament to North American ingenuity and greatness.