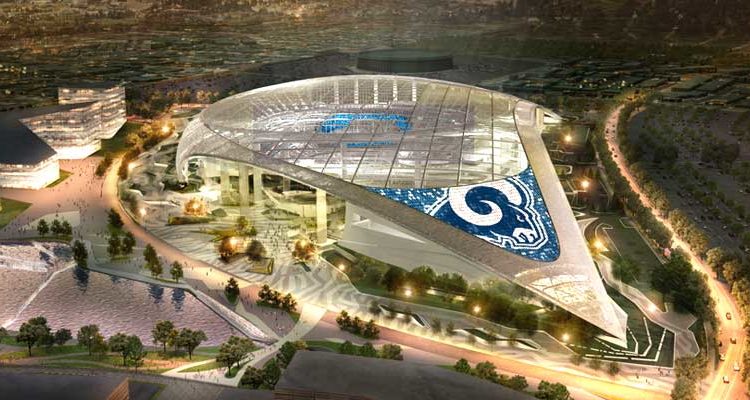 When the LA Rams packed up in the middle of the night in 1983 and headed for St. Louis, Los Angeles never thought they would see the sight of them again. However, when Stan Kronke, the owner of the Rams bought a 60 acre lot in Inglewood California, the speculation would begin. Is the NFL coming back to LA or is Kronke going to build another Walmart Supercenter?

In 2015, the rumors were put to rest when Kronke and Stockbridge Capital Group partnered to build a multi-purpose, 70,240-seat stadium designed for the NFL and other events.

The massive construction project would eventually result in a state-of-the-art sports venue featuring a translucent Ethylene Tetrafluoroethylene roof with a mammoth video screen.

Dubbed the Oculus, the screen will be an oval, two-sided structure that is 50 feet tall, while stretching 120 yards in total length. Bigger than the current largest screen in Dallas’ AT&T stadium.

Along with the stadium, the project will include the new Hollywood Park entertainment complex and neighborhood. The area will be made up of retail stores, office space, residential and condo units, a luxury hotel, a movie theater, 25 acres of public parks, playgrounds, a lake with a waterfall fountain and a brewery.

The stadium will also include a performance and theatre venue that will be attached next to the stadium. This auditorium venue will hold a capacity of 6,000-seats for concerts, plays or similar events.

The stadium site was previously home to Hollywood Park, a thoroughbred race track built in 1938 and is on a piece of land that’s 3 times the size of Disneyland.

The original cost of the stadium project was estimated to be approximately $2.66 billion, but construction costs are predicted to go higher. This will make it the most expensive sports venue ever built.

After the Inglewood city council approved and rezoned the area, the project was off and rolling. Earth began to move in February 2015 to prepare for general construction that would begin later that year. At the same time, NFL Commissioner Roger Goodell approved the proposal and the Rams’ relocation back to Los Angeles.

Inglewood has already seen an increase in economic activity to the area. In addition to the 3500 expected jobs for the construction, the stadium could create another 10,000 related jobs and bring in about $13 million in taxes to the city.

If you live in the Inglewood area this could be a good employment opportunity for you. If you are interested in learning how to become a contractor or a heavy equipment operator, this guide has everything you need to get started.

The project kick off began with a ceremony attended by Kroenke, Goodell, politicians, media, members of the Pro Football Hall of Fame. Each took a ceremonial first scoop of dirt with shiny silver shovels as massive earth-moving equipment waited in the background.

The project’s first challenge involved the depth at which the initial dig would be. Because of its proximity to the LA Airport, the ground needed to be lowered 100 feet. This required more heavy equipment and manpower to keep the project on schedule.

The Federal Aviation Administration had to approve the use a 110-foot-tall Liebherr LB 44 rotary drill rig so it would not pose a hazard to incoming air traffic.

This was the first of several pieces of heavy construction equipment to be used during the project.

“Normally, a football stadium would be in the ground maybe 30 feet but we’re in the ground 100 feet, so the race has been dig to the bottom and then start your way back up,” said Robert Aylesworth Jr. of Hunt Construction Group, who is in charge of stadium construction.

During the dig, more than 6.1 million cubic yards of dirt has been removed. Enough to fill 600,000 dump trucks, according to site construction officials. The heavy work was done by a variety of earth movers, excavators and bulldozers.

The second challenge that arose with the project was the storage of a workforce. Although the project is currently one of the nation’s largest construction sites, the booming Southern California real estate market has tightened the labor pool.

There are generally 1,000 workers on site at any given time, but  that number is expected to quadruple by the end of the build.

Mother nature did not help either. The stadium was originally supposed to open for the 2019 NFL season, but heavy rains last year delayed excavation. It’s new opening date is the summer of 2020.

The first event in the new stadium will be Taylor Swift and the “Lover Fest West” concert in July.

In the meantime, the LA Rams will continue to play at the Los Angeles Memorial Coliseum and the Chargers will stay at the StubHub Center in suburban Carson.

Once the initial dig was completed, work began on the massive retaining wall and foundation pillars that would support the oval stadium.

The most distinctive part stadium’s design is the enclosing canopy. Twelve cranes, including one of the worlds largest, were brought in to lift the massive steel sections.

Dutch company Mammoet, was hired for the crane operation. The large cranes can take up to a day and a half to lift just one of the 2.2 million pound canopy sections.

The enormous canopy consists 31 steel sections that supports the canopy sections and will be covered with a clear plastic roof.

In June of 2018, the project “topped out” which is a construction term used to signify that the highest steel beam on the stadium has been put into place.

Now, it’s on to the inside. Aerial photos and tours from inside the stadium have shown just many much construction equipment is involved. The stadium floor had several Genie and Snorkel lifts, industrial forklifts from United Rentals and cranes by Bragg and Mr. Crane moving material and workers to where they need to be.

Along with AECOM Technology Corporation, an engineering firm, and HKS Architects, the team has years of experience with previous stadium projects. Builds that included 17 other stadiums for the NFL, 10 stadium renovations and most recently, the Sacramento Kings’ new basketball arena.

Turner Construction Company has a 100 year history of building stadiums They are not only well know for their construction of several modern sports stadiums, but go all the way back to building Harvard Stadium in 1910.

So what is it going to be called? SoFi Stadium. According to the Los Angeles Business Journal, SoFi Lending Corp., an online lending firm, secured the naming rights for the next 20 years. The deal with the LA Rams and Chargers will pay the teams around $30 million a year. The highest for a sports venue naming rights contract.

As of August 2019, the status of construction is about 75% complete.

The LA Rams and Chargers will be the main attraction, but the facility has already booked some other big name events. The stadium will host Super Bowl LVI in 2022 and the College Football Playoff National Championship in 2023.

Sofi Stadium is also expected to host the main opening ceremony during the 2028 Summer Olympics.

When it is all said and done, the SoFi Stadium project will be one of the most innovative construction feats in the world. It really showcased how modern construction equipment can create an architectural marvel that will last for generations.