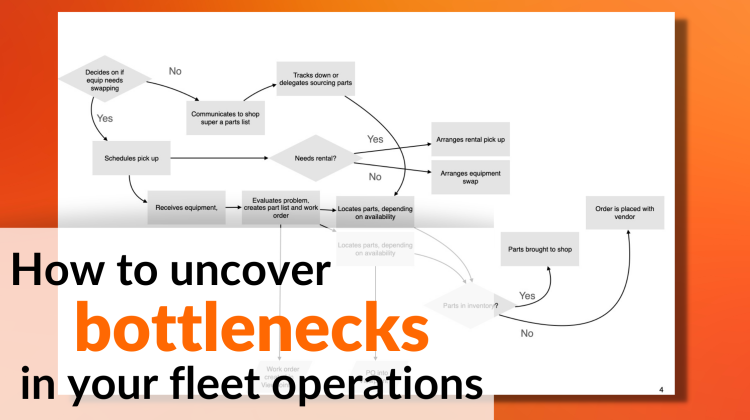 This story of how to improve fleet operations actually begins with a cautionary tale.

When April Jorgensen came onboard at Dolese Bros., a construction supply and material company in Oklahoma City, Oklahoma, it was to help clean up a bit of a mess.

“They had implemented a fleet management software and … they were reversing and pulling it back,” says Jorgensen, director of operational systems and design at Dolese. “It was a terrible failure, and largely because they hadn’t looked at their processes.”

Here’s what Dolese had to learn the hard way: Without first examining your fleet management processes, you won’t know where the opportunities exist to improve your construction productivity and add profit margin back to your bottom line. No technology acts as a silver bullet.

So how do you go about evaluating your current processes and establishing new workflows where needed?

It starts with a swim lane diagram.

At the Association of Equipment Management Professionals Connect Conference and Annual Meeting in San Antonio on March 20-22, a panel of fleet experts, including Jorgensen; Dan Kunce, CEM, equipment manager at Hawkins Construction Company in Omaha, Nebraska; and Craig Worrell, CEM, director of fleet operations at Mass Excavation and Davis Constructors in Anchorage, Alaska, shared what they learned from this evaluation and how you can use it to improve your fleet operations.

How to Conduct a Swim Lane Diagram

First, let’s define a swim lane diagram. It is a detailed evaluation of an entire process from beginning to end that documents all roles and the steps they play in achieving a goal.

For example, if you want to analyze your repair process, start with the moment that equipment breaks down. What happens next? Who communicates the breakdown? How is it communicated? Who receives the information? What does that person do?

The analysis should reflect an accurate picture of what happens, not an ideal picture of how you’d like the process to work. If you are uncertain about what happens during a particular step, you should ask those directly involved.

Questions you’ll want to ask include:

You can initially document the exercise on a whiteboard, on paper, or on a spreadsheet — whatever works for you. Then, the flow can be visually mapped out in the presentation software of your choice.

List all roles involved on the left. Add shapes to symbolize a particular step, such as an oval to signify a beginning or end, and a diamond to equal a decision point.

Once you have everything documented, now it’s time to start your evaluation.

Ask yourself and your teammates:

“Doing this process really opened our eyes at my company’s organization, like holy mackerel, we have got some horrible inefficiencies,” Kunce says.

When Dolese conducted its swim lane diagrams, Jorgensen says it was the first time that all of the company’s stakeholders — from accounting to operations and mechanics — came together to look at everything from a comprehensive view.

“We found out how little a lot of the people knew about how processes worked,” Jorgensen says. “They focused on their little piece, but they didn’t really understand the implications of decisions they make or how actions they take might have downstream. They really learned a lot about how they’re impacting other parts of the process.”

Though there will understandably be variations in fleet maintenance processes among organizations, general themes emerge that can help unearth where the problem spots are located. At the AEMP Connect Conference, the panelists identified three major themes after conducting their swim lane diagrams.

1. The fleet maintenance process touches a lot of hands

Many people are involved when equipment breaks down, from the equipment operator to the site superintendent to the shop manager. It’s not uncommon for the process to include a half dozen to a dozen roles, internally and externally.

With so many people participating in the process, it can get messy quickly. Every team member needs to take ownership of their responsibilities and understand the significance they play in limiting equipment downtime.

This can take investing in the culture of each team to produce the results you want.

“We’ve spent a lot of time over the last decade developing our dispatch team … to be efficient,” Kunce says.

At Hawkins, dispatchers are trained to keep equipment utilization rates high and know where equipment is at all times.

Dispatchers also typically have field experience, so they can evaluate whether the equipment request is necessary or if it’s the right fit for the job.

Another thing that Hawkins does to keep roles clearly delineated is that they have dedicated parts runners. Previously, picking up parts often fell to mechanics, but Kunce recognized that they needed to be focused on maximizing wrench time.

“I think that’s partly because some of our older generation mechanics like to run and get parts — they like to talk to the parts guy,” he says. “I understand relationships, but I also get my butt kicked every day for production.”

Simply tell us what parts you’re looking for, and we’ll take care of the rest. You’ll get quotes sent right to your email to quickly review and approve.

Because of the number of people that can be involved in the maintenance process, each step needs to be clearly and accurately recorded in a timely manner. Misinformation or confusion about where the repair or your parts procurement stands can create all kinds of chaos.

This became apparent as Mass Excavation grew over the past 15 years, Worrell says.

“The larger we got, the more bottlenecks we kept running into,” Worrell says.

Many of those hang-ups revolved around the collection of information, such as machine hours. After evaluating how to minimize these issues, Mass Excavation decided that adding a third-party telematics solution to at least a portion of their fleet would help alleviate these pains.

“It used to take six hours to gather all the hours,” Worrell says. “Now it takes 1 minute and 35 seconds. It’s an export and an import.”

Worrell says that when implementing technology, it’s important to identify the data you really need out of it that can have the biggest impact. Otherwise, it’s easy to get bogged down in information overload.

“We’re trying to just focus on the things that are going to bring a lot of value to us up front,” he says.

This approach also adds clarity to the minimum ROI anticipated.

“We expect to gain about three-quarters of a person’s hours or 1,500-1,600 hours that we can reuse somewhere else,” Worrell says. “So that’s huge. Our savings is going to be really close to $25,000-$50,000 in the first couple of seasons, which will help to offset the upfront cost of implementation and then the monthly fees.”

But it doesn’t take a massive investment and integration of a new technology solution to find ways to better document your fleet workflows.

Start by using what’s already available, which can be pretty simple. At Mass Excavation, the mechanics and parts runners participate in group text threads to track all parts pickups. At Hawkins, Kunce says his team has developed Microsoft Office 365 forms for documenting and saving equipment inspections.

Collecting data and recording information accurately is one thing. But if the data remains siloed, it makes it challenging to identify trends and move beyond a reactive approach to maintenance.

For example, Jorgensen says at Dolese, a parts clerk must call various equipment operators to record the engine hours, leaving her to chase them down if she can’t get them in order to plan purchase orders. After conducting their swim lane diagrams and identifying areas that can be improved, the company is now rolling out a pilot program for asset management that should eliminate this manual collection of data coming from different sources.

“Finally, she’ll get all that information together,” Jorgensen says. “Now we can forecast those purchases and create one for a bulk order versus having to create a single, independent PO.”

As Dolese shifts from paper processes to digital, Jorgensen says some team members have expressed initial hesitations about the changes, but once they’ve started using the technology, they see the benefits it brings.

“Our mechanics really like it, because they’re actually doing less work on the administrative side,” she says. “It saves a whole lot more time and money in later parts of the process.”

Jorgensen, Kunce, and Worrell all agree that regardless of the solutions you implement, the key to successfully eliminating problems in your fleet maintenance processes is to empower your people.

“Give people the ability to make hard decisions and then the accountability that comes with the good or bad consequences of that decision,” Worrell says. “By implementing good practices, we actually have seen the morale of the people develop. That just continues to build that trust — that information will just flow and people will be willing to participate.”